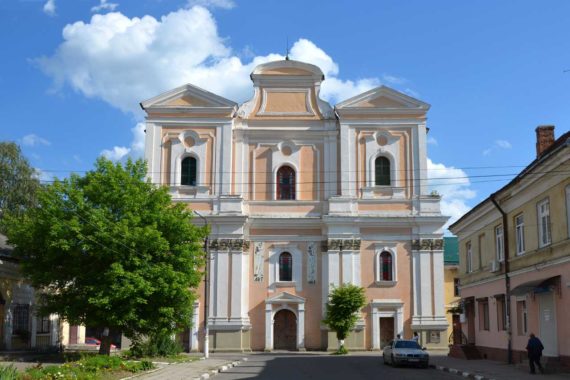 In 1935 there was installed a church organ of Czech-Austrian company “Gebruder Rieger” from Krnov in South Moravia. The organ had 25 registers, two manuals and a pedal, pneumatic tracker action. Prospect of the instrument is wooden, partly gilded, with 3 segments and main section of 2 parts, topped by one section. It was made ​​in the Neobaroque style.

In 1939 this church was closed by the Soviet authorities. During the 2nd World War it was ruined – only the walls remained. The organ was also affected. After war and till 1980 in church there was a food warehouse. In 1980 restoration started. Renovation of this building for Organ Hall became a business of the whole town. Chandeliers, stained glass, benches, decoration items were made ​​after the projects and by hands of students and teachers of College of culture, which was located in the monastery. Benches and wooden items were made ​​in Sambir furniture factory, chandeliers and ceiling lamps – in Lviv enterprises.

Restoration of the organ for organ hall was performed by Estonian craftsmen from small town Rakvere headed by Khardo Kriyza. Kriyza is one of the most popular in Estonia families of organ-builders. The modern professional Khardo Kriyza is a son of famous organ-builder Edward Kriyza. The town gave 150 000 of karbovantsi for building of the organ. Remnants of old organ were demolished and transported to Estonia.

On August 7th 1987 works in the hall were finished and on October 31st there was the first organ concert, where Valeriy Korostelyov and Vitaliy Pivnov performed. Despite the problems, musical properties of the organ were wonderful. According to the measurements of the professionals, acoustic properties of Sambir Organ Hall are wonderful: reverberation time in some places take up to 6,5 seconds. Organ completely fills the sound space by its power. In 2004 an organist Lyudmyla Laruk with her student increased the pressure in air channels. This improved the sound of the organ and gave it more power and brightness.