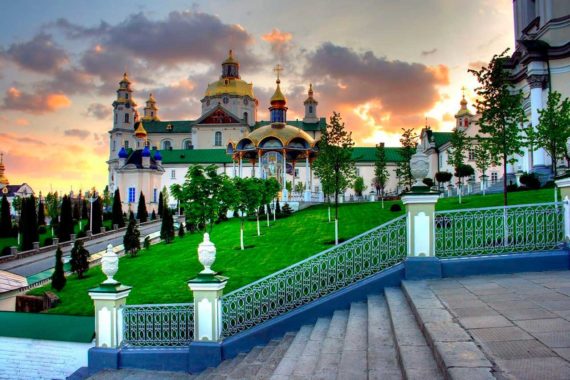 It is a town in Volhynian part of Ternopil region, Kremenets district. Pochajiv is located in picturesque place among Kremenets hills. Everything is beautiful here – architecture, nature, climate.

Pochajiv is famous for its monastery and icon of the Virgin of Pochajiv. Together with Saint Sophia Cathedral (Kyiv) it is the main sanctuary of Orthodox Ukraine.

City is located in 25 km to the west from the district centre. If the weather is good, you can see a belfry of Pidkamin monastery from the Lavra terrace.

Pochajiv monastery is famous since 15th or even 13th century. Chronicles mention that the first monks came here in 1240-1241, escaping from the Mongols, who conquered and destroyed Kyiv. First rooms of the monastery were located in caves. Small wooden Holy Assumption church became the first building, which was constructed in 13th century on the terrace of northern slope of the hill. Legend says: in that moment monks saw the Holy Virgin in a pillar of fire above Pochajiv hill. It is said that her footprint still can be seen on one of the rocks.

Construction of stone monastery started in 16th century, when the owner of these lands Hoyska (maiden name – Kozynska), gave large donations for building of Pochajiv church and one-storey cells for monks. Because of it construction went faster and was finished in a short time. Apart from that, Hoyska presented a miraculous icon of Holy Virgin to the monks in 1597.

The monastery complex includes numerous religious buildings, stone and wooden fortifications of 17th century (towers and walls). It withstood many sieges during its history. In summer 1675 during Zbarazh war with Turks, when Yan Sobieski was the Polish king (1674-1696), Tatar troops under the guidance of Nurredyn Khan approached the Pochajiv monastery across Vyshnivets and had surrounded it from three sides. Weak monastery fence and some stone buildings could not protect the monks. Abbot Joseph Dobromyrsky persuaded the monks and laymen to pray to the heavenly patrons: God and St. Job. Monks and laymen heartily prayed, clinging to the icon of Holy Virgin and shrine with the relics of St. Job.

In the morning of June, 23rd at the sunrise Tatars had the last council about the attack at the monastery. At that time the abbot ordered to chant the akathist. Together with the first words the Holy Virgin appeared above the temple together with heavenly angels, which held swords. The Reverend Job was near the Holy Virgin, praying about the protection of the monastery. Tatars thought that they saw a ghost and started to shoot at Holy Virgin and St. Job, but arrows flew back and wounded those who shoot. Enemies were terrified and in panic they started to kill each other. Defenders of the monastery rushed in pursuit and captured many of them. Some of the captive decided to be baptized and stay in the monastery forever.

Architectural ensemble of the monastery is formed with a dominant element – Holy Assumption Cathedral of 1771- 1783. It was built according to the project of architect Hotfryd Hofman. Petro Poleyovsky headed the construction. Hofman skillfully used the rocky terraces. Their raising rhythm underlines the delicate silhouette of the cathedral. In the ceilings of side corridors of the temple there are round holes, Through them three tires of choir can be seen. This architectural measure creates a fantastic play of light and shadows in the interior.

Since 19th century old buildings are being reconstructed and new buildings are created: gate building, belfry, printery, Holy Trinity Cathedral (1910 –1913 after the project of O.Shchusev, who is an author of Lenin mausoleum, in pseudo-Russian style).

In the monastery there are 13 bells, 2 of them are clock bells. Guides say that in past the biggest bell was heard in the distance of 30 km and now – about 10. On the third floor there is a bell, which weight is 11,5 tons! From its sounds the earth vibrates.

The temple is famous for its wonderful acoustics. What about icons, there are some of 1646 year and the main iconostasis was brought from Moscow.

The miraculous icon has a golden casing with real diamonds and rubies. It is crowned by one of the Popes.

The monastery has also a cave church of the monk Job in a real cave. His relics are kept there.

Complex of monastery buildings in Pochajiv includes cells (1771-1780), bishop`s house (1825), belfry (1861-1871) and gate building (1835). Famous architects Matviy Poleyovsky, Petro Poleyovsky and Ksaveriy Kulchytsky took part in development, planning, preparation of interior and organization of construction. Since 1830s old buildings of the complex are being restored and new buildings created. These new constructions include gate building, belfry, printery outside of the complex (1895-1896) and the Holy Trinity cathedral.

The Holy Assumption Cathedral is marked by rocaille decorations: bow-shaped cornices, half-columns of composite order, twin and single pilasters, decorative vases and many other details. Only the majestic baroque of a huge dome is more impressive than this rocaille.

Oil paintings on the walls of the cathedral were made in 1876 by Lavra artists. Some paintings are placed in massive cartouches. Works of a gifted artist Luka Dolynsky, created in 1807, had been preserved till now. Interior paintings were renovated in 1980.

Holy Trinity Cathedral was built after a project of Shchusev by the architect A.M. Rukhlyadev and the craftsman S.S. Lukasevych. Wide stairs lead to the big mosaic panel of southern portal, which is made after the sketch of Nicholas Roerich. Western panel is made after the sketch of Shchusev and detailed by P. Neradovsky. Cathedral walls are decorated by silicate paintings.

Cells were built from bricks by H. Hoffman and K. Kulchytsky. They include some rectangular buildings, connected together with Holy Assumption Cathedral in a closed composition with an internal yard. The north building is three-storey, all other – two-storey. They have corridor planning with one-side location of rooms. Corridors have cross-shaped ceilings.

The bishop’s house is built in the classicism style. It is a rectangular building, made from bricks. It is located on the slope of the hill, that’s why its eastern façade is three-storey, western and northern – two-storey, southern – four-storey. In 1846 Taras Shevchenko lived and worked here. A memorial board reminds us about it.

The belfry is made of bricks and plastered. It has five tiers and is adorned by rich decor. It is the third highest bell tower in Ukraine (after the Holy Assumption Cathedral of Kyiv Pechersk Lavra and Saint Sophia’s Cathedral of Kyiv). Its height is 65 metres.

The gate bulding is built in the classicism style. It is a brick two-storey rectangular building. Its main façade is made as a four-columned Doric portico.

If you plan to stay here for a night, it is useful to know that the hotel is located just opposite the Cathedral – it is a two-storey building. In 1980th in Pochajiv there was a museum. Now its building is given back to the church.

Magnolias in blossom near the Holy Assumption Cathedral are also memorable. For Volyn region such trees are a wonder.

Apart from the monastery complex, there are some more architectural sights in Pochajiv. The first of them is a Church of All Saints, which was built as a cemetery chapel in 1773-1775 in late Baroque style. At that time classicism started to step on the heels of mannered excessive baroque. It is clearly visible in the chapel.

The church is built from bricks. It consists of a nave and an apse. The nave is covered with a high close vault, which ends with a lantern. The apse has a cross-shaped ceiling. The façade is decorated by the Tuscan order pilasters.

Three-blockhoused one-roofed temple was reconstructed in 1746. First the sanctuary had a roof over a nave and an apse. Now the nave is covered with a closed ceiling on the low octagon. Church has a gallery on figured corbels. The cornice of low octagon is on the same level as ridges of roofs of lateral blockhouses. The women’s part and the nave are connected by two archs: lower pentagonal one and upper rectangular one. The upper arch is horisontally stretched, its upper corners are truncated.