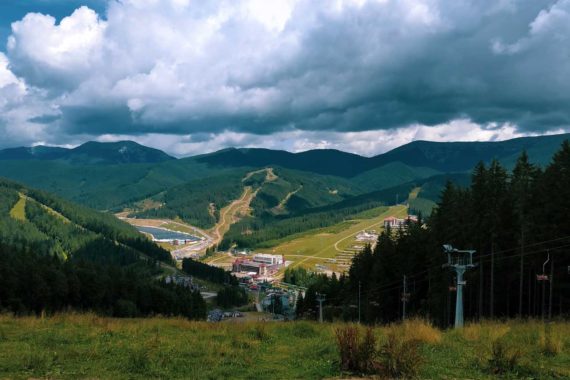 Bukovel is a Ukrainian ski resort near the foot of Bukovel mountain. It is situated near the village Polyanytsya, on the altitude of 900 m above the sea level, 30 km far from Yaremche. It is the biggest and the most modern ski resort in Ukraine.

The resort is a record-breaker in Ukraine because of its big amount of ski-lifts and developed infrastructure: four comfortable hotel complexes “VIP-rezydentsiya”, “Edelvejs”, “Bukovel” and “Shelter”. Transport connection through mountain roads.

Total length of tracks is 51000 m. 100% is facilitated by snow-making equipment.

Capacity of all ski lifts if about 30000 people per hour. About 12 000 people can comfortably ski on the slopes at the same time.

The resort is actively developing, majority of buildings were constructed during last several years. There are active works on infrastructure enlargement and construction of new ski tracks. In 2010 mogul track and giant slalom track were opened.

Vorokhta is a highland resort on an altitude of 850 m above the sea level. It is located on the upper part of Prut river, on the territory of Carpathian natural national park.

According to the legend, the name is derived from the name of soldier-deserter, who settled here in 17th century. Archaeologists found flint tools, which show that this area was inhabited before.

Vorokhta is famous as a centre of winter kinds of sports. There is a complex of four ski-jumps with a ski-lift, which work all-year-round owing to synthetic cover. There is also a chair-lift of 2 km length (now it is under reconstruction).

Yaremche (before 2006 – Yaremcha) is a town of regional importance in Ivano-Frankivsk region of Ukraine. It is located on the river Prut, on the highway Ivano-Frankivsk – Rakhiv – Uzhhorod. Railway connects the town with regional centre and Lviv.

It is believed that a poor man Yarema first settled in the mountains and his name became the name of the town. The settlement was founded in 1787 and received the status of town in 1963.

On December 14th, 2006, the Supreme Council of Ukraine changed the name of the town from Yaremcha to Yaremche. Two ancient villages Dora and Yamna, which are located lower and higher on the Prut river, were attached to Yaremche. These villages have separate railway stations.

Active settling of people in Hutsulshchyna took place in Princes’ era. It is reflected in toponyms of Yaremche district – Malyvo mountain, Boyarsky stream (Dora), Mykulychyn village. In 1893 in Dora (Bily Kamin creek) bronze boilers and sword of 8000 B.C. were found.

Dora village, which included Yaremche for a long time, had an interesting symbol in 19th – 20th century: a lion, who walks to the left (in a heraldic way). The lion was shown with raised left paw.

Yaremche became separate in 1895 after building of the railway Delyatyn – Voronenko. In 1894 one of the biggest arched railway bridges in Europe was built here. It had archs of 65 m height. This bridge was designed by engineers Stanislav Kosynsky and Zyhmund Kulka according to the theory of elastic arches, based on the researches of Austrian Society of Engineers in Vienna. It’s a pity, but in 1944 this bridge was ruined during Second World War. Well-being of Yaremche as a resort started in 1894. Till 1899 fifty wooden and masonry villas were built.

On October 17th, 1909 Regional parliament in Lviv finally gave Yaremche the status of separate settlement. In the result of election of May 30th -31st, 1911, the retired sergeant B. Makarevych became the head of community. The emblem of Yaremche village showed a deer, which runs to the right (in a heraldic way).

Yaremche is located in a hollow among mountains called Gorgany (these mountains have asymmetric slopes and sharp peaks). Town is situated in south-western part of Ivano-Frankivsk region, in the central part of Ukrainian Carpathians (Gorgany, Pokutsko-Bukovynski Carpathians and Chornohora). Mountain heights differ from 400 m to 1542 m. Yaremche is surrounded by mountains: in south and south-west there is Yavirnyk mountain range, in west there are Shchyvka, Chornohorytsya, Synyachka, in east – Makovytsya.

On the territory of Yaremche land there is Carpathian national nature park, which was created on June 3rd, 1980. It has a state importance and is included into Nature Reserve Fund of Ukraine. Area of the park is 50 495 hectares. Relief of the park territory had been forming for a long period of time: about 35 million years ago there was Tethys ocean. Sand, clay and limestone superimposed on the bottom of the ocean. After the retreat of water they had petrified and under the influence of external factors had created the modern mountains.

Souvenir market of Yaremche is both a touristic and an economically profitable object. It is a Mecca of folk arts and crafts. Here are demonstrated almost all kinds of art. Skillful and hardworking hands of local craftsmen create Easter eggs, carved, inlaid and burned wooden vases, jewelry boxes, plates, spoons, barrels, various ceramic kitchenware, tiles, sculptures, embroidered and woven shirts, rushnyky (traditional towels), carpets and sackcloth, blankets of wool, articles made ​​of beads, metal and leather… Different people come to the market. There are people, who just love to dive into this sea of folk arts and crafts, bargain with real Hutsuls, listen to their unique dialect. And even they don’t buy anything, they get unforgettable impressions and pleasant memories.

Monasteries: Friary of St. Andrew; Monastery of monks of Studite Order; Nunnery of Sisters of Mercy of St. Vincent.

In Yaremche you can use the following touristic services: bike tourism, tours on ATVs, mountain and hiking tourism, ski tourism, equestrian tourism, tours around Carpathians, rental of equipment.

The most popular touristic routes are:

Apart from residential kinds of rest there are car, hiking, water and ski types of tourism. Here are the recreational routes from Yaremche – “Kamyanka” (5 km), “Our friend nature” (2 km), “To the Makovytsya mountain” (8 km), “Path of Dovbush” (4 km).

Yaremche is a low-mountain climatic resort, surrounded by mountains, which turn into picturesque hills, covered by dense coniferous and leafy forests, in north and south. Sanatoriums for patients with lung tuberculosis and recreation houses are situated here.