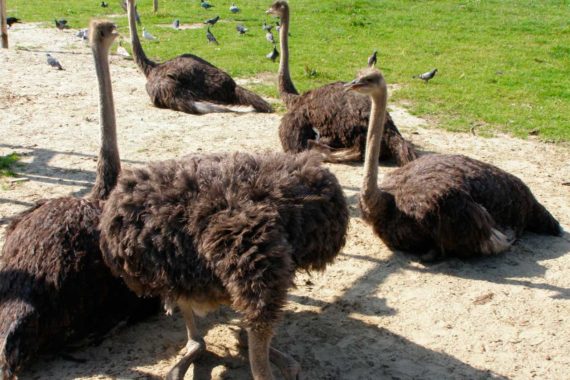 The private zoo “Bilaky” is located in Sambir, Lviv region. More than 20 species live in the spacious enclosures there. Among them there are peacocks, pheasants, foxes, raccoons, Carpathian brown bear, buffalos and deers. It should be noted that most of the animals arrived here injured, sick and weakened, but all of them were cured by the employees. The best conditions were created for the residents of the zoo, and a pair of lions had recently born four cubs, whereas in the professional zoos such things are rare.

Ten years ago, when a circus came to Sambir, they had a problem – they had nothing to feed a tiny lion cub. Ivan Ivanovych bought the unfortunate baby, gave him milk from a bottle and took that little lion together with him in the back seat of his car. Fur hat of the cub was “like a nest”.

Friends began to bring him animals – a little deer with a broken leg, an emaciated wolf cub, even hungry bear cubs. He cured animals, fed them and gave names.

– Give me your ear! – Standing near the cage of the lion, Bilak requested. Lion came closely to the owner, lay, hold out its ear to be tickled and started to play, tumble on his back, sway on the floor with delight.

For example, grizzly. It appears to be a sweet creation. Ivan Ivanovych calls him and the bear runs at the call, grabs a tin trough by its paw and holds it out. The owner puts in a piece of bread, grizzly brings the trough so gently to himself, eats and again holds out for the second portion.

– Guys, don’t you want to run? – he asks the wolves. They at the moment form the circle and start running in the cage. But when they are told “Enough, guys, you are good fellows!”, they stop. Amazingly, all the animals here are calm and even gentle. This is because of the living in grace and goodness.