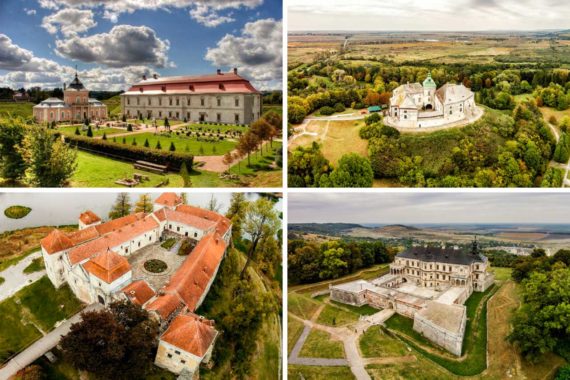 Travel to castles of Lviv region

One-day car trip by the famous tourist route called “The Golden Horseshoe of Lviv Region” is, perhaps, the best option for those who want to receive maximum of impressions and emotions in a very short time. Tour includes visits to three incomparable pearls of medieval defensive architecture – Olesky, Pidgoretsky and Zolochivsky castles. The total route length is only about 24 km, so you will have enough time for the review of each sight. In addition, even very small children can be easily taken to this trip. They will be interested not less than you.

First written mention of Olesko castle is dated by 1327. Andriy or Lev – sons of Halicia-Volynia prince Yuriy Lvovych – are considered to be its founders. This architectural sight is famous not only for its preservation, but for the fact that the Polish king Yan Sobesky was born here. Bohdan Khmelnytsky also spent his childhood in Olesko. The castle acquired its current appearance of the palace in 1725. Nowadays, the building serves as a house of Muses – it is a branch of Lviv Art Gallery, which placed in the castle its collection of works of art of 13th – 19th centuries. And in the basement there is an interesting museum of torture instruments.

Knowledgeable people claim that Olesko castle serves as a haven for ghosts since ancient times. And guides with suspicious glitter in the eyes tell everybody detailed stories about the ghost of Adam Zholkevsky. The legend says, that he is sometimes visited by a ghost of monk Yan from close monastery.

Then you need to drive by the highway E-40 about 5 km. Before Yaseniv village you must turn right to highway Т-1413, which will lead you to Pidhirtsi village (it is 2 km far from the turn from E-40). Castle was built here between 1635 and at the expense of Polish magnate Konetspolski. Pidhoretsky fortificational complex was built as an example of combination of impressive palace with bastion fortifications. At one time it was considered one of the finest palace and castle complexes in Europe. It is square-shaped with side about 100 m. In the corners there are pentagonal bastions. Before coming of Soviets the castle in turn belonged to famous Polish families. European monarchs had been here many times. Among them there are Polish kings Vladyslav IV and Jan Sobieski, the Austrian Emperor Franz Josef I and German Kaiser Wilhelm.

It’s not only the most beautiful, but also the most mystic castle of Ukraine. At nights ghost of so-called White Lady wanders around the corridors. It is said that sometimes she had been caught on photos, but the fate of these photos and photographers is covered by mistery. Some years ago Pidhoretsky castle became a real laboratory of numerous explorers of paranormal phenomena. Impressive conclusions were made ​​by a team of Ukrainian popular TV show “The Battle of the psychics”. All twelve visionaries unanimously declared that the castle is crowded by ghosts! Then the sight was visited by the professionals from authoritative American research team “Ghostbusters”. After detailed investigation with the help of ultramodern equipment, American stated for sure: ghosts are almost in all corners of the palace. So, it is better not to stay here for the night. Moreover, the castle is under reconstruction now, that’s why its internal rooms are closed for visitors.

The last point of trip is located in 16 km to the south from Pidhirtsi (on the same highway Т-1413). It is a Zolochiv castle of 16th-17th centuries (it works in the same regimen as Olesko castle, telephone of the administration: (03265) 43385. The fortress belongs to neo-Dutch kind of fortifications. It is a so-called “palazzo in fortezzo”, because it unites functions of fortress and dwelling place. During its long history, the palace had been a royal residence, a manor of noblemen, a prison and even an educational institution. Architectural ensemble of the castle includes so-called Big living and China palaces and gate tower. In the Big palace the Polish royal family lived during their rare visits to Zolochiv. Tourists are extremely interested by mysterious stones, which are covered by unknown scriptures. They were found in one of the surrounding villages and transferred to the castle in 19th century. These stones are said to belong to omnipresent Templars (we must mention that this version arrived long before the arrival of mister Dan Brown on the global literature horison). The carved scriptures are not decoded yet…