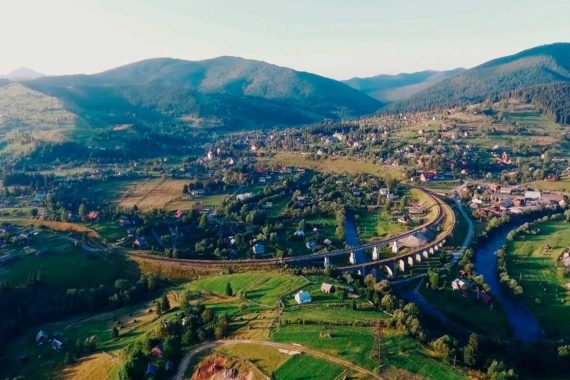 Vorokhta is an urban-type settlement in submission of Yaremche city council (Ivano-Frankivsk region). It is located at an altitude of 850 meters above sea level on the river Prut. Vorokhta is a resort and a training center for Ukrainian athletes (ski-jumping, biathlon, ski races).

According to the legend, the name of this village appeared in 17th century. These legends say that the first inhabitants of the settlement Mochernyaky had a servant, who was a deserter from the army, named Vorokhta. He was considered to be very capable, and locals had often asked him for an advice, saying “I go to Vorokhta”. And hence the name “Vorokhta” was given to the whole settlement.

Since the late 19th century Vorokhta had been developing as a sports and touristic centre. Construction of the railway to Vorokhta in 1894 also contributed to this. Several resort hotel for rich tourists were built here in 30’s, and in 1957 the mountain ski school was opened here. Today Vorokhta is one of the major centers of tourism of Ivano-Frankivsk region, both in summer and winter.

For fans of skiing there are several ski lifts. Near “Avanhard” base there are 300-metre T-bar lift and 2-kilometre chairlift. On Makivka mountain there is a 250-metre T-bar lift. During the winter season two more 100-metre ski lifts are constructed. Near the village there is a sports-tourist base “Zaroslyak”. There is a start of the route to the highest peak of Ukraine – Hoverla.

In the village there is a sight of Hutsul wooden architecture of the 17th century – the Church of the Nativity of the Virgin. Arched railway bridges (viaducts), built here in the 19th century, also are the outstanding architectural sight. One of the viaducts in Vorohta is included into the list of the longest stone bridges in Europe (130 m), the length of one of the arches is 65 m.