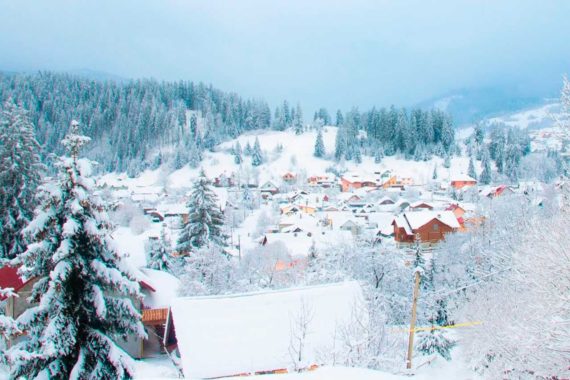 Slavske is a village of Skole district of Lviv region, which is situated in Carpathian mountains in the picturesque valley of rivers Opir and Slavka. Slavske is a very popular place of mountain ski sports, tourism and rest, because the famous Carpathian mountains Trostyan (1235 m), Pryslip (990 m), Plishka (1038 m), Kycherka (845 m), Play (876 m), Ilza (1066 m), Klyva (1069 m), Pysana Krynytsya or Dovbushanka (1236 m), Vysoky Verkh (1245 m) are located around it. The village is located at the altitude of 590 m above sea level.

The name ‘Slavske” is derived from the name of Slavko river, which received its name from the heroic battle of Zakhar Berkut fighters with the Tatar-Mongol hordes of Batu Khan in 1241. These events are beautifully described in “Zakhar Berkut” by Ivan Franko. The grave of Zakhar Berkut is located on the mountain peak in Tukhlya village near Slavske. The surrounding territory is covered with old legends. Near Slavske in Svyatoslav village the Drevlyan prince Svyatoslav is buried. He was killed by his own brother Svyatopolk in 1015. The second version of the origin of the village name is connected with the legend about Prince Svyatoslav. His fighters, who settled here after his death, were called “slavni” (glorious).

Territory of Slavske was inhabited since 10th century. This date is shown by flint tools of Neolithic Era. First documental mention of Slavske was written in 1483 in papers of Przemysl district court. These papers tell about a landlord Ivanko from Krynytsya, who gives to his wife Marusya half of his property in Krynytsya and Slavske.

History of Slavske as a ski resort started in 18th century. In 19th century the village had already became a famous resort. Construction of the railway from Lviv to Mukachevo in 1887 helped this popularity. The following famous writers and leaders had their rest and treatment here: I. Franko, V. Hnatyuk, N. Ustyyanovych, I. Trush, Y. Kurylas, O. Novakivsky, O.Kulchytska and others. At that time Halychyna was a part of the Austro-Hungarian Empire. Surrounding mountains and forests belonged to well-known Austrian entrepreneurs Hredel and Shmidt, who built a lot of enterprises and recreation facilities for thousands of visitors from whole Europe. In 1820-1830 in Slavske there were built ski-lifts and ski jumps on Pohar mountain.

1970-1980 were the years of the greatest development of ski tourism. At that time more than ten ski-lifts and some children’s sports ski schools were built on the slopes of surrounding mountains. Annual championships of USSR and Ukraine and also international competitions were held here.

Slavske has a unique local microclimate: a constant windless weather with big amount of snow in winter. This snow cover stays here almost till April. Such climate is caused by the natural location of Beskydy and Gorgany mountain ranges. That’s why Slavske is the biggest Ukrainian skiing resort with well-developed infrastructure: hotels, boarding houses, private sector, ski-lifts with tracks of different levels of difficulty, ski rental agencies, restaurants etc. Each hotel has nutrition points and comfortable saunas.

In winter on many skiing tracks there are snow groomers. Tracks on Pohar mountain are equipped by light for night skiing. There are several mountain skiing tracks of European importance. There works one chair lift and 15 T-bar lifts, which have a capacity about 7000 people per hour. Chair lift on Trostyan mountain (2750 m long) is very popular. T-bar lifts on this mountain have length from 600 to 1200 m. Tracks have different levels of difficulty, which allows to ski both amateurs and experienced sportsmen. In the lower part of western slope of Trostyan mountain there is a so-called “Big valley of novices”, which is a wonderful place for training of beginners. Near the lift there are luggage storage rooms, where you can leave your belongings. Near the tracks there are bars, where tourists can eat, drink tea, coffee or hot wine. On the territory of the town there are more than 10 ski equipment rental offices. There are also shops of ski equipment and accessories, service centres for repair and preparation of mountain ski equipment.

“Politekhnik” is one more well-known track. It is suitable for those, who train their skiing skills or for parents with children. The mountain has a gentle slope about 1 km long. There are two T-bar lifts: “Politekhnik” and “FMI”.

Transport connection of Slavske is well-developed. There is a modern railway station. Trains from all regions of Ukraine and from abroad (Russia, Hungary, Slovakia, Austria) stop there. There is also a well-developed network of suburban railway and car transport.

Resort also attracts tourists in summer, when they can see beautiful landscapes with coniferous forests on the mountain slopes.