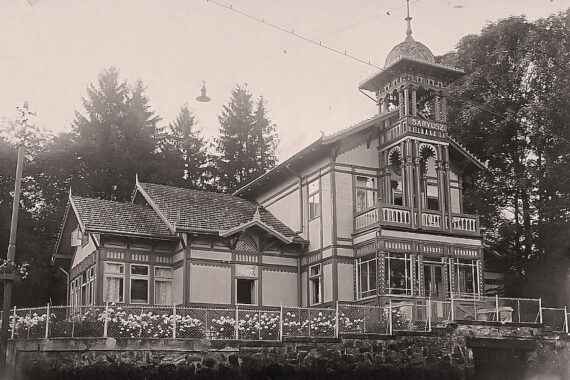 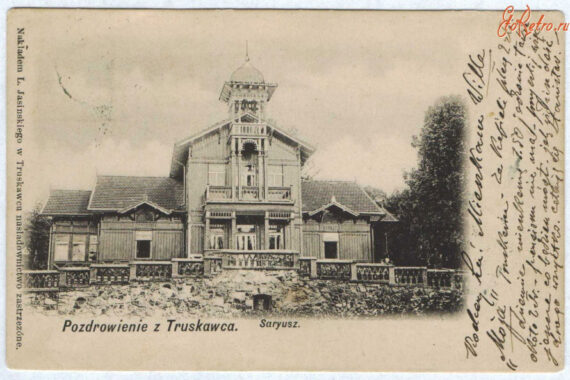 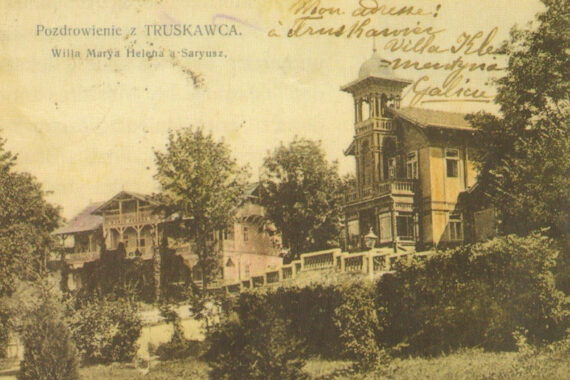 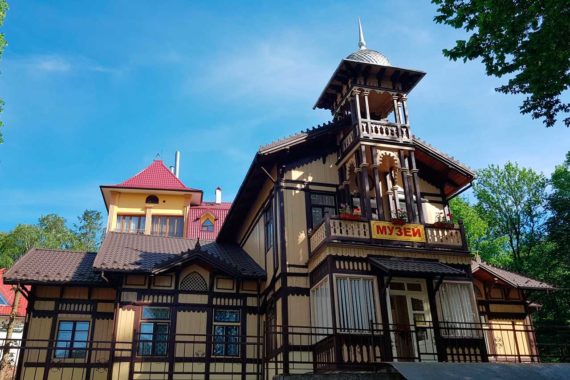 now the Museum of the resort town of Truskavets…

The museum building of the resort town of Truskavets is a decoration of the lower terrace of the resort park, which has long been called Dolyna (the Valley). The museum was opened in the former resort villa &quot;Saryusz&quot;, built in 1901 in the Art Nouveau style with signs of &quot;historicism&quot; and motifs of Moorish architecture, commissioned by the Polish Rozwadowski family.

Architecture and style of villa “Sariush”

The building consists of a central elongated body and two single-storey outbuildings. The main entrance is allocated on the first floor with a glazed veranda, above which, a balcony is arranged on the second floor. A two-story openwork tower, made in a pseudo-Moorish style, grows above the balcony. It has a small dome with a scaly wooden covering. The house is decorated with wooden carvings above the ground floor windows, as well as under the wooden brackets supporting the roof. The walls of the building are decorated vertically with planks; at the corners there are pilasters.

In 1980, due to the richness of magnificent architectural forms, this building was granted the status of an architectural monument of the early twentieth century by the decision of the Lviv Regional Council and taken under state protection. In 1981 and 2008, this status was confirmed by the relevant decisions of the Truskavets City Council.

Today, in this resort villa, the museum welcomes Truskavets citizens and guests of the resort to get acquainted with the history of the world-famous balneological resort from its foundation till nowadays. The history of the museum of the resort town dates back to Soviet times and the early 1980s. In mid-1981, the Truskavets City Executive Committee decided to open a museum of the Truskavets Health Resort. And already on December 29, 1982, the Museum opened its doors to its first visitors. According to the history and memories of eyewitnesses, the Museum was constructed so quickly due to the support and assistance of enterprises and sanatoriums of the city, especially the Territorial Council of Resort Management, which took care of the institution for almost 10 years. Since 1992, the Museum has been subordinated to the Department of culture of the city government.

During the last two years of the museum&#39;s work, the exposition of the resort tow  has been completely renewed, the museum has been significantly replenished with new exhibits, such as photographic material and documents, new cartographic material, household items, culture, clothing and weapons…

In 2012, on the eve of the Intercession and the 70th anniversary of the Ukrainian Insurgent Army, the museum presented new showrooms named &quot;Insurgent kryivka&quot; in the basement of the building. Due to the museum&#39;s exposition, visitors will learn about the medieval Truskavets of princely times and Polish kings; noble Truskavets from the times of Austria-Hungary and the Polish state, when a resort was founded and strengthened its position in Europe; Truskavets resort of the Soviet era and independent Ukraine, famous for its healing mineral waters, maintaining its glory for almost 200 years.

In addition to the showrooms, the museum has two halls, where various exhibitions of art and local lore are organized, and a large lecture hall, where cultural and educational events are held. We will be genuinely pleased if our museum will help you get to know the charming Prykarpattia and its jewel – the resort of Truskavets. You are welcome to visit our museum!