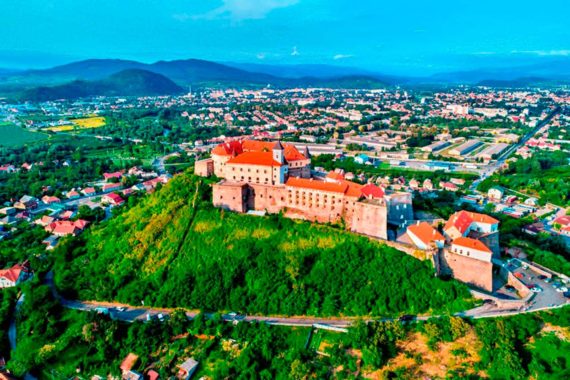 Mukachevo has a long and glorious history, which is one of the most interesting pages of Transcarpathian region. 1108 years had passed since the first written mention of the city. Mukachevo was founded on the historical crossroad of trade routes. It was granted a status of city in the 14th century. Then Mukachevo was included to the list of royal property, and it was granted the privileges like other medieval cities. During this period, the city was being built, it was expanding and changing the composition of its population.

Since ancient times trade routes crossed and different cultures met each other here. Various political storms swept over Mukachevo through the ages. It was a part of Hungary, Galicia-Volhynia principality, Austria, Austro-Hungarian empire, Czechoslovakia and the Soviet. Now it is a part of independent and sovereign Ukrainian state.

From whatever side you approach Mukachevo, you can see the majestic military medieval architectural sight, covered by combat fame and ​​legends. It is Palanok castle, built for defense and control of trade and military routes. It played an important role in formation of Mukachevo.

Since 1993, here is the Mukachevo historical museum, regional museum and an art gallery.

A monastery on Chernecha mountain is one more decoration of the city. Its founder was a Lithuanian-Ruthenian Prince Fedor Koryatovych. This monastery underwent a lot of reconstructions and changes. Since 1772 there was a residence of bishops of Mukachevo eparchy. Prominent leaders of culture lived and worked there. Now on Chernecha mountain there is a Nunnery of St. Nicholas.

Mukachevo is a cradle of many crafts, which became a powerful multi-industrial complex. In the past our masters of casting, masons, potters, glassblowers were widely known around the world. Now industrial builders, skiers, confectioners, manufacturers of jersey, concrete, clothes, ceramics, furniture and bricks of Mukachevo are well-known in Ukraine and beyond.

Nowadays Mukachevo is a big European industrial city, which managed to preserve and renovate the building of city hall, theatre and other objects, which were built in the end of 19th and beginning of 20th century. Here the architectural heritage of Austro-Hungarian Empire is conserved. Spirit of Habsburgs wanders here together with a captured tune with exquisite gothic and playful baroque.

Berehove town is located on the banks of small river Virke, near the mountain foot. Slopes of the mountains are covered by vineyards. Berehove is known for its ancient traditions of grape-growing and wine-making.

Famous reformed church writer Papaji Pariz Ferents (1649-1716) in his book “Dictionarium latino-hungaricum” states that before Hungarian invasion there was a Roman settlement, called Perigium. But this assumption was not scientifically proved.

During many centuries Hungarian kings were the owners of this settlement.

Widely known legend tells us about quite early foundation of the city. The famous researcher-ethnographist Tivadar Lehotsky writes: “According to the legend, on the site of modern Roman Catholic church there was a pit, which had been dug by hooves of fighting bulls. A shepherd named Sas found a huge treasure there and built a church and a town, which was later called Berehsas. But this legend doesn’t have a historical confirmation.”

Since 1504 the town is called Berehsas in the documents.

Since 1946 Berehove is an official name of the town. It is the only place of Transcarpathian region, where the majority of people are Hungarian.

Berehove is a town of district submission, a centre of Berehovo district. It is located in 72 km from Uzhhorod, the region centre. Territory of Berehove district is 802 square kilometres, population – 83,3 thousands people. 32 thousands of them live in Berehove. Town is crossed by Virke canal, which connects Borzhava river with Latorycya river.

Till 1944 the town was a centre of Berezhska zhupa (district).

Town played an active role in the liberation war of 1848-1849. After the Treaty of Saint-Germain-en-Laye it joined the Czechoslovak Republic.

In June 1945 Zakarpattya region was included into Ukraine.

In Berehove there is one Russian, 2 Ukrainian, 3 Hungarian schools, one Ukrainian and one Hungarian gymnasium, professional-technical and medical colleges. Hungarian Pedagogical Institute has been opened recently. Here are the professional Hungarian national theatre named after Gyula Illyés and the amateur folk theatre of the Culture and Rest Centre of the district. The art school also plays an active role in the cultural life of the town.

In the town there are various industries: timber, furniture-making, device-building, sewing and other, but in modern hard economical conditions they work not at their full capacity. Berehove district is famous for its wine-making. Transcarpathian branded wines are bottled in the winery of Berehove.

In Berehove there are monuments to Sándor Petőfi, Lajos Kossuth, Gabriel Bethlen and Gyula Illyés and more than 42 memorial boards to different leaders of history, culture and art.

The quaint building with small tower and graceful Art Nouveau panels on the facade will not allow you to make a mistake: it was built in the epoch of modern. In the building of former casino there is the best restaurant of the town – “Zolota pava”. The style is keeped even in details: stage in the shape of peacock tail,bird-shaped lamps, bouquets of feathers. Luxurious mirrors and soft sofas. Bilingual menu. Polite doorman. Here are tasty salads, huge portions and ridiculous prices.

But it is better not to visit an outdoor thermal pool after a meal. This pool receives water from the well of 1680 m deep. Near this aqua-joy there is a freestyle springboard, sports ground, sauna. You can find all these facilities on the territory of sports base “Zakarpattya”.

Calm lateral streets crawl like snakes among small, but special mansions of 19th century. Rare multistorey buildings look like aliens in this frozen past. Past is sweet, but with a bitter note.