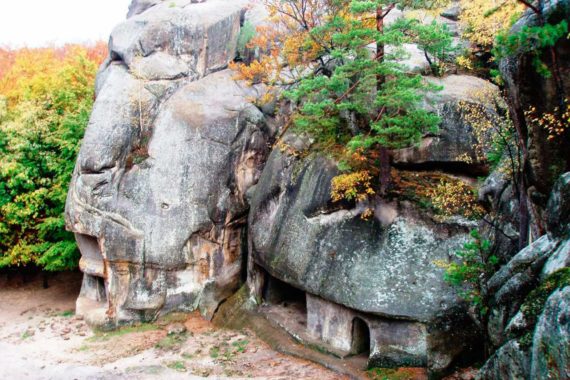 This unique rock complex, named after legendary opryshok (noble robber) Oleksa Dovbush, is located on the altitude of 668 m above the sea level. Dovbush rocks are an obvious fortress of 10th century. They are located in 11 km to the south-west from Bolekhiv (Ivano-Frankivsk region), not far from Bubnyshche village. It is a geological natural sight – rocky peaks of sandstone of 80 m height. Bizarre complexes of sandstone rocks were formed more than 70 million years ago on the bottom of warm sea. These strange natural formations saw all geological, biological and historical epochs from trilobites to men. The stone labyrinth is 200 m wide, its length from east to west is about 1 km. Beech and spruce forest merges over it. It 10th-17th centuries B.C. there was a pagan sanctuary-paleoobservatory. After spreading of Christianity in Carpathians on the place of pagan sanctuary a small cave monastery-hermitage was created. Then it became a guarding fortress (according to “Tale of Igor’s Campaign”, it was one of strongholds, which Prince of Halych Yaroslav Osmomysl used to prop the Hungarian mountains). This fortress withstood the Mongol invasion on Rus and existed till 16th century.

According to the legends, in 17th- 18th centuries there were located camps of freedom-loving Carpathian noble robbers, particularly in 1743 – platoons of Oleksa Dovbush. They used caves as a treasury for goods, captured from moguls and moneylenders. In the north, near the entrance of the labyrinth, there is a stone of 50 m height, carved by vertical cracks. Its basis is about 6 х 8 m. In 150 metres from it there is a group of rocks. In the very south-western corner of stone range there is a horisontal area (40х60 m). In north and south it clung to steep rocks, in west and south-west it is surrounded by an artificial ditch, which is now about 6 metres wide and 3 metres deep. For sure, in ancient times this ditch was deeper. Together with the ditch, the yard territory was protected by a bulwark, which was later srengthened by stones. Some separate rocks of north-western ell, which are adjacent to this small yard, are separated by deep gorges that have been used for building. You can see a lot of slots and blockhouses. System of stairs and rocky galleries leads to the middle and upper part of rocks, where remnants of building had remained. Thus, Dovbush rocks are an obvious fortress of 10th century. For water supply of the garrison, a square cistern was carved here. Now it is half-filled by earth, but still has a depth of 4 m, indicating the ability to store a large amount of rainwater. Taking into account the slope of the terrain, there are carved stairs. The upper part of the “tunnel” is covered by stone vault.

In rocky walls there are some caves. They are carved in the monolith of northwestern sand cliffs. Three of the caves are artificial, and the fourth (second in the row) is made in a natural gorge. Caves have clear geometric shapes, correct proportions, level surfaces of vertical walls, very precise squares and fine finish of ceiling. Stonework texture indicates that the caves were cut down and surfaces were aligned by small solid tool, so the relief of notch is less than 1,5 cm. There are no traces of polishing in any room. Taking into account the stonework texture and geometrical shapes of rooms, an architect and restorer Zenoviy Sokolovsky dates these cave constructions by 10th century. The first (left) cave is located on the level of natural yard. It is carved in the extreme rock, which borders the defensive ditch. Cave size is 2,9х6 m. Its ceiling imitates the shape of the arch. Along northern and southern walls there are wide stone benches. In front of the entrance there is a small niche, above which there is a shallow part of the second tier. On the sides of the cave there are well visible traces of adjacent wooden construction. The second cave is a space, located in a narrow but high natural gorge. This is a two-tiered construction, carved in side rock walls. There is a clearly visible system of longitudinal slots for wooden constructions of ceiling. The third cave is a three-wall space of trapezoidal shape, carved in a solid rock. In front of the rooms here is a carved terrace-platform, which goes up to the fourth cave. The fourth wall, which is absent now, was made of stone and had existed till 19th century. Third and fourth caves were united by an artificial platfrom and a roof (canopy). The fourth cave can be entered through a small corridor, where you can see clear traces of jambs, not straight walls, uneven ceiling and floor. Fortification walls ended by galleries, which are well-known in later Ukrainian defensive architecture (15th – 16th century) as machicolations. To enter the fortification territory, you had to pass through the ditch, carved in the rock. The inner part of the bridge could be lifted. The gate tower had a gallery in its upper part. Now we can see the profile of this gallery, carved in the rock. Apart from fortifications around the yard and constructions on the rocks, Bubnyshche complex had an additional defense.

On the north-eastern side there is a steep inaccessible rock in a shape of a lone “finger”, which is 27 m high. There was a three-tiered defensive tower. 27-50 warriors could live there. Such towers (keeps) in 12th – 13th centuries were located around all Europe. They were designed for defense of approaches to the fortifications. In castles keeps had often been the last points of resistance (castles in Pnev, Rakivets). From the southern side this rocky keep was surrounded by water reservoir, which has the remains of a dam. Defense with water was widely used in Zvenyhorodka, Halych, Lutsk and Tustan.

Buildings of the rock complex Bubnyshche have a well-organized defensive system, which indicates its special purpose, which, however, can not be linked to its sacred purpose. This is confirmed by the fact that Bubnyshche was a significant stronghold even in 14th century.

A.Petrushevych says that in that time there was a Hungarian garrison under the guidance of Emeryk Bubol (this resulted in the village name), which fought against the Polish troops during the invasion of Halychyna (like Tustan garrison).

Remnants of 80% of construction allow to reproduce this fortress in its most likely form and create a united complex of wooden fortifications on the rocks, which certainly will impress tourists and give additional attractiveness to this unique natural object.