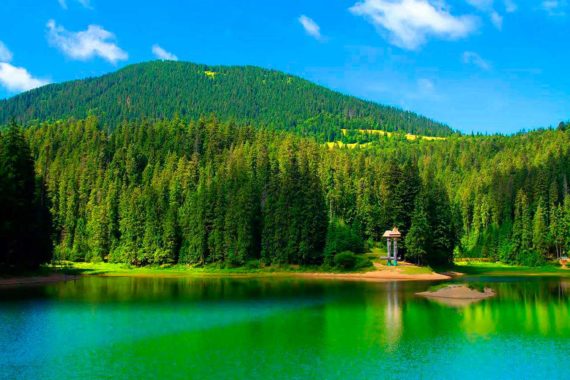 Trip to the highland lake Synevyr – “Sea Eye of Carpathians” can become a most interesting trip from the district centre. The lake is situated at the altitude of 989 m above the sea level. All the beauty of Ukrainian Carpathians seems to concentrate in this place.

The road (32 km) to the lake from the district centre is very picturesque, but not very comfortable. Road goes along the Volovets stream and after an abrupt turn to the right climbs mountains among valleys of Synevyr pass (800 m). Stop on the peak and enjoy the landscapes. On the west you can see Borzhava mountain range, on the south there is Ovcharsky Verkh mountain range, on south-east mountain Strymba stands (1719 m) and on north – mountain Kamyanka (1578 m). Somewhere beneath there are the scattered pearls of white huts of Synevyr village and the blue thread of Tereblya river. On the river there is a cascade of artificial waterfalls, which provides wonderful conditions for cultivation of trout – the fish delicacy.

4 kilometres upstream – and you’ll the the buildings of touristic base “Synevyr”. There are 1,5 more kilometres to the lake and it is worth to go this way on foot, because it is a nature reservation, filled with rare plants and animals. Behind the trees you can see the reflexes of clean water. On the bank of Sea Eye there is a cosy wooden hotel and some gazebos.

If you wish, you can reach the island in the centre of the lake on a wooden raft.

The legendary origin of species.

The place that has been fascinating by its beauty for a long time, produced some poetic legends about its origin. Here everything is as you expect: sea of love and sharp rocks of suffer. The most popular legend about Synevyr origin tells about class inequality as an obstacle for creating a happy family. Once these mountains belonged to the earl, who was a father of young blue-eyed beautiful daughter Syn. Local dwellers took care of earl’s herds, cut down forests and mowed the fragrant grass. Once the earl decided to inspect the work of lumberjacks and his daughter went together with him. The girl wandered around the forest and gathered flowers. Suddently she heard a wonderful song of a panpipe. On the meadow Syn saw a young shepherd called Vyr. She asked him to play more and more and promised to come back in some time. Their secret dates became more and more often, the earl became more and more angry. Prohibitions of her father didn’t stop Syn. The earl ordered to kill the boy. Once, when Vyr waited for his beloved on the meadow, servants of the earl pushed a huge stone on him. When Syn saw what has happened, she embraced a high stone grave and started to cry bitterly. Tears poured over and over, they flooded the entire lawn and Syn disappeared in these blue waters. This new lake was called by the names of lovers. Its water has a colour of Syn eyes and the island in the middle is a place of Vyr’s death.

There is a second legend, which does not explain the name of the city, but is also filled by love and sadness. Once the herd of young shepherd Ivan was killed by wolves. The shepherd understood that the earl would not pardon him for that and decided ro run away from the imminent massacre. He said goodbye to his beloved girl and went to the foreign lands. There he became very sad. Each night he came to the sea shore to cry out his sadness, “Please, the Omnipotent sea, look at least by one eye at my Verkhovyna and send a bow to my native land!” The sea heard the cry of shepherd, made ​​its way through the mountains and absorbed the earl and its servants. But the sea was attracted by proud Carpathians and decided to stay there as a pure sea eye.

How was it in real?

Scientists discovered that Synevyr was formed in post-glacial period (about 10 000 years ago), when during a strong shear the mountain rocks rised on the way of a rapid flow, creating an irresistible dam. Under the pressure of two technical atmospheres the water found an exit. In 60 m from the south-eastern bank the slope is pierced by a stream of lake water. The Sea Eye is nourished by four other streams and underwater springs.

Area of lake is about 7 hectares, its maximal depth – 22 m. The average depth of Sea Eye is about 8,2 m. The lake consists of two parts – northern (deeper one) and southern, which are separated by an underwater ridge of 1,5 – 11 m height. Synevyr contains about 400 000 m3 of water. There are two kinds of fish in the lake – minnow and trout.

The calm mirror of water is rarely disturbed by mountain wind. The lake water is marked with unusual taste: it does not contain chlorides. In summer water heats up to 20° С, but because of weak displacement in depth it reduces to 4-5° С. Figures of Syn and Vyr, created by sculptors Ivan Brovdi and Mykhajlo Sanych in 1984, reflect in calm water.